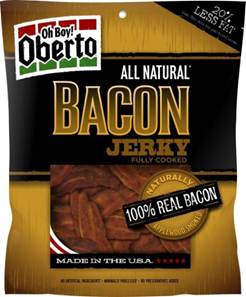 From the Indiana Chronicle In The Kitchen: A Guide:

Here in Indianapolis I’m known as “Bacon Brian” to some people due to my love of bacon and having thrown a few stellar Bacon Tweetups in the past. So obviously when an unexpected package showed up from Oh Boy! Oberto, that was bacon themed, complete with a bacon wallet, I was ecstatic.

Also in the package were two bags of their new “All Natural Bacon Jerky”, which I promptly had to make sure my children didn’t devour on the way home (the bacon doesn’t fall far from the hog).

Now I’ve had other brands of bacon jerky in the past. And I was expecting sort of the same thing. Your typical jerky that tasted like it was marinated in Liquid Smoke for a while before being dehydrated. Don’t get me wrong, I do like those, but that was not the case here.

The Oh Boy! Oberto Bacon Jerky tasted like real bacon. But it wasn’t curled up nor greasy like pan fried bacon is. And it is absolutely delicious, which the kids agree.

While it won’t replace my pan fried bacon, it certainly will be around for when we’re on the go, or to make a quick and easy BLT.