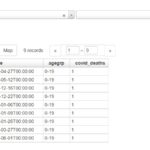 Following up on yesterday's post about the CDC reporting that 349 children, ages 0-17, having died from COVID-19 in the United States of America, I thought you might be curious how that pans out closer to home, here in my state of Indiana. To date, there have been a total of NINE reported COVID-19 deaths in people 19 and under (feel free to explore the dataset for … END_OF_DOCUMENT_TOKEN_TO_BE_REPLACED

If you're anything like me, you probably enjoy a good tale of terror now and then, but don't always have the time to sit down and read the latest Stephen King or Dean Koontz novel. For this very reason I am quite fond of the horror anthology genre. In the past few months Skyhorse Publishing has released three such titles, all of which I've had the opportunity to take in and … END_OF_DOCUMENT_TOKEN_TO_BE_REPLACED

Skeleton Cat After nine lives, Skeleton Cat is back for his tenth. And he has big dreams: to be a drummer. So he rattles and shakes his way through town to find the perfect band. And this phantom cat cause quite a hilarious scene. Kristyn Crow’s punchy beat, rollicking action, and clever rhyme paired with Dan Krall’s ghoulishly charming art makes Skeleton Cat a perfect, … END_OF_DOCUMENT_TOKEN_TO_BE_REPLACED

1) Chupacabra CHUPACABRA, the riveting sequel to TENTACLES and CRYPTID HUNTERS, reunites Marty and his unusual uncle, cryptozoologist Travis Wolfe, as they search the world for Wolfe’s daughter, Grace. Grace has been kidnapped by her grandfather, the ruthless and dangerous Noah Blackwood, who has also stolen the two dinosaur hatchlings Wolfe was raising in secrecy. Now, with … END_OF_DOCUMENT_TOKEN_TO_BE_REPLACED

From the 2013 Bookshelf: I love logic puzzles and games like Sudoku, so Number Cross Puzzles intrigued me from the first look.  I'll admit that at first glance, Number Cross Puzzles does look a bit overwhelming since the starting point is a little harder to come by than in other number games. But after you have the first one under your belt, it clicks and you're off to the … END_OF_DOCUMENT_TOKEN_TO_BE_REPLACED