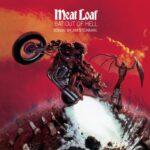 "Like a bat out of hell, I'll be gone when the morning comes." ~ Meat Loaf (affiliate link) According to multiple sources including NBC News, "Meat Loaf, the singer and actor whose debut album Bat Out of Hell in 1977 became one of the best-selling of all time, has died at the age of 74." As a child of the 70s-90s, Meat Loaf was always in the musical mix, as was an … END_OF_DOCUMENT_TOKEN_TO_BE_REPLACED